Process & Faith was founded in 1983 as a program of the Center for Process Studies at Claremont School of Theology, by faith leaders and theologians who believed that theology grounded in the process thought of philosophers Alfred North Whitehead and Charles Hartshorne makes the most sense of both historical faith and contemporary experience. “Process theology” does not have its own doctrines or creeds. Instead, it is a basic conceptual orientation that sees the universe as creative, interrelational, dynamic, and open to the future. It does not reflect a specific religion or faith tradition. As a distinctive way of viewing reality, it is a way for people to deepen the particularity of their own faith while opening the way to mutual respect between faith traditions. Process theology gives people the conceptual tools for thinking and acting theologi 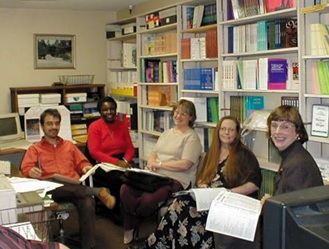 cally as engaged members of a faith community and citizens of the world.

Historically, Process & Faith has received most of its interest and support from liberal-minded Christians who found their lived experience at odds with classical articulations of God. For those looking for an alternative to anti-science, anti-diversity, anti-questioning Christianity, the process expression of Christian faith inspired hope. By providing training and resources for progressive ministers, our publications, courses, lectionary commentary, and liturgies helped process pastors to practices process Christianity.

While process thought has always been meaningful for faith communities beyond Christianity, and while Process & Faith has always been open to serving those communities, it wasn't until 2021 that P&F took on a decidedly more inclusive approach. Through a strategic collaboration between the Center for Process Studies and the Cobb Institute, Process & Faith became a community-led, multi-faith platform for exploring ideas, forms of spiritual vitality, and healing forms of action for the sake of enriching faith communities.

Find out more about our organization.