The Pentecost celebration is the one major church festival that does not face any intrusion from the secular world. Christmas and Easter have been hijacked be commercial interests that compete with pastors who try to present the message of the season in as clear a way as possible.

No one has figured out a way of commercializing Pentecost. Unfortunately most churches have relegated the festival to a minor role and the opportunity to teach congregations about this great observance is mostly overlooked. Pastors and Worship Committees need to correct this problem and plan services that little by little make Pentecost part of the great trilogy of major observances of the year.

Acts 2:1-21 is the traditional text used on Pentecost. It is dramatic and it should be performed instead of merely read. I was blessed to have been pastor in Hollywood, California where many aspiring actors attended and I was able to see nuances in texts when they were performed that I had not noticed when I read them or someone else read them. Many people tune out the reading of the Scriptures but the acting of the texts is hard to tune out.

It is imperative that pastors find a way of reminding the hearers of the text that this is a reversal of the story of the Tower of Babel (Genesis 11:1-9). Building on that one needs to emphasize that the real miracle is not one of speaking in tongues but of understanding the message of common folks. The Galilean peasants are miraculously understood by the pilgrims who had come to Jerusalem from distant lands in the Roman empire. These pilgrims were better off, at least financially, than the peasants who were speaking in their own rustic ways. Hearing an important message in a common language is certainly important now more than ever.

I recently attended a conference in which Cliff Cobb, second oldest son of John Cobb Jr, addressed the important issue of helping create a viable response to the ecological catastrophe looming over our planet. Cliff was a very sensitive adolescent who read voraciously about the threats to the planet years before the first Earth Day. The awareness of the impending doom depressed him in the same way that the young eco-activist from Sweden, Greta Thunberg, became despondent. Cobb quoted Thunberg:

“When I was about eight years old, I first heard about  something called climate change… if this was true we should not have been talking about anything else….
“But no one ever talked about it… To me, that did not add up. It was so unreal. So when I turned 11 I became ill. I fell into depression, I stopped talking, and I stopped eating. In two months, I lost about ten kilos of weight.” (Greta Thunberg, “The disarming case to act right now on climate change” TEDxStockholm, 28 January 2019)

Cliff Cobb then shared that he had experienced something similar and even contemplated suicide. He said that his depression ended when his father, John B Cobb Jr. decided to write the book Is It Too Late? A Theology of Ecology (Bruce & Glencoe, 1972; rev. ed. Environmental Ethics Books, 1995). Seeing an adult taking seriously the threat that the planet faces freed him to be a healthy teenager. Greta Thunberg has rallied many adults and young people to create a worldwide movement to save our planet and all its inhabitants.

Cliff Cobb ended his presentation referring to Thunberg and to his own sadness and depression about the ecocide around the corner but he preceded his personal witness with a proposal for a necessarily ambitious plan to forestall the catastrophe. He proposed four elements needed to mobilize public support needed for the challenge we face: A Common Purpose, A Common Philosophy, A Common Life and A Common Story. I invite preachers to use the miracle of a “common language” as depicted in the Pentecost miracle as a way to motivate people of faith to move to other common projects designed to contribute towards the protection of our beloved, threatened planet.

The Pentecost communities that experienced the miracle of the common language moved to have all things in common and this must not be overlooked now. It is extremely important for those who use the pulpit to educate and inspire to take seriously what Cliff Cobb is suggesting and what his father, John B Cobb Jr. has been teaching for many decades, that the best way to follow Christ these days is by becoming “Earthists,” defenders of the earth. For preaching, this translates into digging into the texts for every Sunday and finding ways to connect them to the primary task of our time, the defense of the planet. Sometimes the task will be easy, as in Pentecost, when every text can be connected without difficulty to the task at hand. Easy or difficult we cannot avoid the responsibility to give the children of our congregations the clear message that the adults that surround them understand their mission to assure them that they do understand the dimensions of the challenge and wish to work so they can have an inhabitable and enjoyable planet for their time on earth. 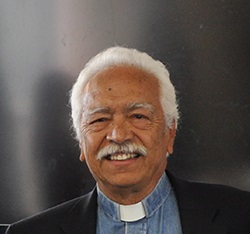 The Rev. Dr. Ignacio Castuera has been involved in ministry since his teens in Mexico. He is a Claremont School of Theology alumnus who served churches in Hawaii and California. Castuera was District Superintendent in Los Angeles, psychological counselor at UCLA, Social Service Agency Administrator and National Chaplain for Planned Parenthood Federation of America. Ignacio has been active in the Process Theology International community since the mid 1960’s.