Chapter 1, verse 1 tells us that the prophet Isaiah begins his work in the time of King Uzziah. Uzziah’s story can be found in 2 Chronicles 26. Generally, Uzziah has been regarded as a good king, wise in his rule and faithful to God until his disastrous decision at the end of his reign. Uzziah inherited a weak kingdom from his father and spent most of his early reign strengthening the borders of Judah.  Presumably, these prophecies from Isaiah come during this early part of Uzziah’s reign.

Let Us Argue It Out:

As usual, there is so much to preach from these verses. The theme of actually doing good works versus simply engaging in pious ritual makes for a great sermon.

The Spirit struck me at verse 18, “Come now, let us argue it out, says the Lord….” How remarkable. God will argue it out with us. The note in my Harper Collins Study Bible says, “Argue, as in a lawsuit before a judge (cf. Job 23.7).”[1] That is not the only way argue can be used here. It could also refer to the Talmudic sense of argue, one that is much more relational, where the facts and the nuance of a situation are questioned and inspected. Talmudic argumentation probes and scrutinizes all of the angles on a question. Often, more than one opinion about the right interpretation or course of action result. Just as often, the argument and the different outcomes are preserved and studied, without one prescription on the matter prevailing over the other. The argument is preserved because the process of coming to a conclusion and why is just as important as coming to a conclusion.

The Talmud and its process acknowledges that it is possible that more than one right way for any one situation can exist. If God is willing to argue it out with us, it means that God is, at the very least, open to the process of reaching a sound conclusion. This is the not the pronouncement of a coercive tyrant. God’s invitation to ‘hash it out’ is an invitation to relationality. This is an invitation that acknowledges humanity. Humans are not completely powerless beings, puppeteered by God, mindlessly following Divine commands. In these verses, God acknowledges the position of human beings. We are partners, even if unequal in power, in the relationship we have with God.

Back at the end of chapter 10, Jesus visits Martha and Mary, who are most often said to be located in the town of Bethany (John 11), about two miles southeast of Jerusalem. He goes from there to pray, have dinner with some Pharisees, and to cast out a demon, and to teach a gathered crowd. He appears to be traveling, at least some of the time, with the disciples. No mention is made of the specific geographical location since the mention of Martha and Mary’s house. It is probably safe to say that he is in Judea during the events of our text for this Sunday. For this particular teaching, we know that the disciples are present along with other people (see vs. 41).

In vs. 33, Jesus gives the command to “make purses for yourselves that do not wear out.” In today’s world it is uncommon for men to wear a purse, as purses are almost exclusively an accessory for women. In Jesus’s day, it was common for men to wear a purse. The word translated as purse here, really does mean a finished leather or cloth bag used to hold one’s money. It was common for people of both genders to have purses. Usually, these purses tied to the belt/girdle at one’s waist, rather than slung over the shoulder like modern American women’s purses.

In vs. 35 Jesus admonishes listeners to be dressed for action. This may be a reference to the Passover instructions given in Exodus 12:11.

In vs. 36 he goes onto to tell listeners to be like slaves who are waiting for their master to return from a wedding banquet. If you are so inclined, this might be a good opportunity to talk about evil of American antebellum slavery and the continuation of that evil in American society today. The role reversal between master and slave should be noted as a part of Jesus’ vision for what God’s realm looks like in this world. Remember that the last will be first in God’s realm.

Also, vs. 35 mentions weddings. In Jesus’ time, wedding festivities often lasted a week. Then, as now, attending a wedding could often mean a certain amount of travel. It would have been difficult to determine for certain exactly when a person could be expected to return given the variables in wedding celebrations and travel conditions. Communication to the servants about the exact arrival time of the master would have been very difficult. With all of these uncertainties, servants were required to keep ready because one never knew exactly when the master of the house would return. When the owner did return, the servants were expected to open the house immediately and (usually) have a meal and a way to wash up from the road ready to go. During the day, this would have been easy enough, but at night, this would have been a harder task. Someone had to stay awake, or at least sleep by the door with any other preparations ready to go.

Where is your treasure?

Often vs. 34 is read and preached to mean this: where your heart is, there your treasure will be. We believe intuitively, that if I love something, I am going to put my time and money into it. To a certain extent, this is true. I am sure you can think of worthy things in your life that you love and you put your money toward (say, the Center for Process Studies).  The truth of this passage lies in reading Jesus’ observation/warning carefully. He does not ask, “What do you treasure?” He asks, “Where is your treasure?” He says, where your treasure is, there your heart will be, not vice versa. Ask yourself, where is your treasure? Literally, where is your money? What is the most expensive thing you own? Your house? Your education? What is the second most expensive thing? Your car? Where do you get your money from? “Now,” Jesus asks us, “what do you spend the most time and effort on?” First is probably your job, where your money/treasure comes from. Then, with just a little variation, we spend the rest of our time and effort on the most expensive things we own, our homes, cars, and educations.

In envisioning the coming Realm of God, Jesus warns us to sell our things and store up our treasures in heaven. Our job is to build a world that reflects the ‘kingdom/realm’ that it is our God’s good pleasure to give us. This is not, I do not think, a realm that exists only in the sweet by-and-by. I believe that Jesus’ vision of the coming Realm of God is not one what waits until heaven or the end-times to happen, but should be and is happening now. Jesus reminds us not to be afraid because God’s good pleasure is to give us the kingdom. What does that kingdom look like? One where we sell our stuff and give it to those who do not have enough. One where our treasure is in heaven rather than in our stuff on earth.

The passage moves on. Jesus reminds us that it is our job, like slaves to a master, to be ready for this coming/already happening Realm of God. When do we sell all of our stuff and give it to those who do not have enough? Now. If we do, the Master will reverse the roles, and serve the slaves like they are masters. If we are ready, we will be blessed. Now is the time.

I know, dear preacher, that what you have just read above, does not preach. I know that what I have written makes me uncomfortable. I like my stuff. I like my security. Many people come to church today with echoes of the prosperity gospel ringing in their ears. Most of the people in our congregations have been convinced that the good news of Jesus Christ is that God wants us to be rich, to have stuff, and to be secure. Since Jesus appears to want the opposite, or at least want a kind of world where everyone has enough before a few have more than enough, how do we preach this?

I think we have to ask, what really is the good news here? Let us go back to the beginning. “Do not be afraid,” Jesus began. As I said above, I like my stuff, because I like my security. I am afraid of the insecurity that comes with not having my stuff. Jesus responds, “Do not be afraid.” God is happy to give us the Realm. If the Realm is not personal wealth, then what is it? It is a world of justice and peace. That, dear preacher, is something! That will preach. Do not be afraid to speak the hard truths of the gospel! Because the good news is so much better than our small human machinations can even begin to dream up.

God, who wants, and calls, and lures us to the best, wants to bring that vision of a perfected world to existence right now! Where does that start? With us. With each of us. God has a vision of what a perfected world looks like. Each moment, God works with each us to bring that perfected world into being. So, be dressed for action. Be awake. At any moment, at each moment, God comes looking for an open door and ready servants. Once God steps in, it is not to demand and be served, but to serve. We are the little flock, those ready servants. With God, we can make the world better, one moment at a time. Store up your treasures in heaven by bringing the realm of God to life here and now.

A man died and went to heaven. He was met at the Pearly Gates by St. Peter who led him down the golden streets. They passed stately homes and beautiful mansions until they came to the end of the street where they stopped in front of a rundown cabin. The man asked St. Peter why he got a hut when there were so many mansions he could live in. St. Peter replied, “I did the best with the money you sent us.” 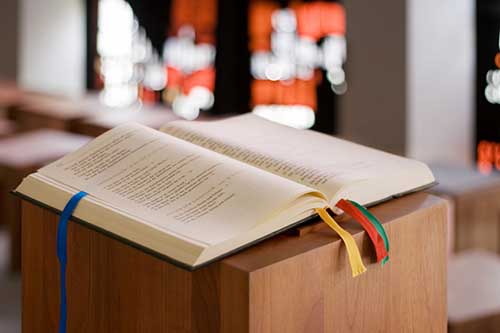 Rev. Dr. Nichole Torbitzky earned her BA from Truman State University and her MDiv from Pittsburgh Theological Seminary. She earned her Ph.D. in Philosophy of Religion and Theology from Claremont Graduate University. Before joining the faculty in the Philosophy and Religion Department at Lindenwood University, Dr. Torbitzky worked as an adjunct professor at LaVerne University.