Discussion of the Texts:     Today marks a mid-point during the Advent season. As we have been preparing for the arrival of Christmas Day, we have now arrived at Gaudete Sunday. Sometimes compared to Laetare Sunday of the Lenten season, Gaudete has been called by Pope Francis “the Sunday of joy” as it marks a day when many Christians set aside the dour preparations of the previous two Sundays to rejoice in the expectation of Christmas Day. This rejoicing is marked by the selection of readings for this Sunday.

We first turn toward the prophet Zephaniah. As Theodore Hiebert states, what is most “distinctive about Zephaniah is the absolute devastation that characterizes his [sic] images of God’s punishments of the people of Judah and Jerusalem” (Theodore Hiebert, “Zephaniah: Introduction,” The Access Bible, 1276). This is in contrast to the reading for the day — we are met with the concluding verses of the text. Hiebert describes this section of the text as an anticipation of renewal (Access Bible, 1280). Whether or not this passage is original to the prophet or not is not of great concern — the content is that with which we concern ourselves. As Hiebert notes (once again), the text evokes Exilic literature. An example of this would be when the author says “The LORD has taken away the judgments against you, he has turned away your enemies. The king of Israel, the LORD, is in your midst; you shall fear disaster no more” (Zephaniah 3:15). The concluding passages of Zephaniah are concerned with how God will be present in tumultuous times.

Isaiah 12:2-6 (used this week as a response to the first reading instead of a Psalm) also presents us with an air of joy. It is important to note that Isaiah is, as Ronald E. Clement tells us, the book that is both one of the four major books of prophecies and a highly complex text at that (Clement, “Isaiah: Introduction,” The Access Bible, Second Edition, 927). Within the context of the whole book, today’s reading represents a psalm of thanksgiving (Clement, 946). As we read, the author tells us that “[w]ith joy you will draw water from the wells of salvation” (Is. 12:3); however, that day has not come for the People of Israel. As the author says that “you will say in that day . . .” (Is. 12:4; emphasis added). The author of Isaiah tells the People to prepare for the day of rejoicing, to even rejoice now in anticipation of the day when God would become present to “royal Zion” (Is. 12:6). Within my tradition, Catholicism, it is verse 6 which is the response of the congregation: “Cry out with joy and gladness: for among you is the great and Holy One of Israel” (United States Conference of Catholic Bishops, “Third Sunday of Advent Lectionary”).

Philippians continues the joyful tenor of Zephaniah and Isaiah. What sets Philippians apart is that the author does not direct us to prepare for rejoicing; rather, we are to rejoice even now: “Rejoice in the Lord always; again I will say, Rejoice” (Phil. 4:4). This is because, as they say, “[t]he Lord is near” (Phil. 4:5). Such joy, in the nearness of God, leads us to peace (Phil. 4:7).

It is in Luke that we are met with a different tone than the three previous readings. The text itself begins with John the Baptist rebuking the people who have come to him: “John said to the crowds that came out to be baptized by him, ‘You brood of vipers! Who warned you to flee from the wrath to come?’” (Lk 3:7), and that “[e]ven now the ax is lying at the root of the trees; every tree therefore that does not bear good fruit is cut down and thrown into the fire’” (Lk 3:9). But the text is not all doom-and-gloom. Much of the middle portion of the reading is devoted to John telling the people to be generous amongst themselves, giving freely of their excess to those who go without, and to deal justly with others. John concludes in Luke (the Gospel of parables and the Gospel of social justice) by telling the people that “‘one who is more powerful than I is coming’” (Lk 3:16). This is the One for whom Christians, during Advent, await; this is the One for whom Christians rejoice on Gaudete Sunday.

Process Theology and the Texts:     Perhaps the deepest challenge for one wishing to interpret Scripture from a process perspective is to find those themes which resonate between process thought and the original context(s) of the text. The goal is to avoid anachronism, given as Scripture scholars of varying proclivities reject the claim that process thought is present within the Scriptural context(s). However, all is not lost if we acknowledge that we are constructing an interpretation for our context. To that end, how then do we re-read the passages through a process lens for our communities? I would suggest that we have two approaches (which are not, I would add, mutually exclusive): John B. Cobb and Pierre Teilhard de Chardin. Both of these philosopher-theologians developed their processive approaches within explicitly Christian contexts. For our purposes today, as well as for the whole of the Advent season, I would focus on what they have said regarding Christ and the Incarnation.

Beginning with John Cobb, I will limit myself to an early passage within his text Christ in a Pluralistic Age: “‘Christ’ cannot name the process . . . if the process leads to nothing. If there is no hope, then all that has been said becomes pointless. Christ is essentially bound up with hope” (Cobb, Christ in a Pluralistic Age 1975, 24). Hope is the crucial theme for Gaudete Sunday; moreover, it is the crucial theme for the season of Advent, let alone the entirety of the Abrahamic traditions (I cannot speak to the role of hope in non-Abrahamic traditions). This same sense of hope for the process thinker is found in the work of Teilhard in a particular way, one with which I am more familiar.

When we turn toward Teilhard, we acknowledge that we are met with a more “substantialist” approach to process thought.1 There are two important points to note here: on one hand, Teilhard does express sentiments which could be said to accord with the Whiteheadian/Hartshornian process perspective of John Cobb; on the other hand, Teilhard retains elements of the substance metaphysic adhered to by his tradition (my tradition), Roman Catholicism. Regardless, given that metaphysical conversation is of limited (though not impertinent) value here, it suffices to say that Teilhard provides another avenue of approach for re-reading the texts. I am thinking specifically of his cosmic Christology. Christ is not merely the process but also its source — Christ is for Teilhard, to use the Whiteheadian term, is Creativity. What is more, Christ is the chief Evolver, the one who introduces novelty (rather than being some impersonal force) into the process. At the same time, Christ is one who is in process and the one toward whom the process is ultimately directed. In short, Christ pervades every aspect of the cosmos and is the highest exemplar of metaphysical law(s) rather than being exempt from such law(s).

Preaching the Texts:     There are so many ways that one could preach the readings from a process perspective, given as I have outlined two such perspectives above.

We could begin with a simple question: when we look around at the world around us, what reason do we have to express the hope and joy we are “suppose” to feel today? For those like myself who have less time than desirable to follow current events, I am still aware of multiple shootings across the United States and multiple natural disasters, as well as the general state of poverty, hunger, and homelessness worldwide. I dare say that all of these “evils” are today attributable to the actions of humanity, and rather than slowing down they appear to be growing worse (we could draw an analogy to the cosmological theory pertaining to the eventual demise of the cosmos).

What is more, many communities who may appeal to process thought are, on balance, privileged communities. As such, another question presents itself: who are we to tell those who are disadvantaged, underprivileged, and oppressed that they need only hold out hope? What hope is there when oppressed communities face so much adversity? Can we say to them, as did the author of Philippians, say “[d]o not worry about anything, but in everything by prayer and supplication with thanksgiving let your requests be made known to God” (Phil. 4:6)? As I write this commentary (4 November, 2018), we may consider the situation at the US-Mexico border: as of today, I have learned that US troops are laying barbed wire along the Texas portion of the border, and multiple Texas militia groups are “marching” toward the border to “fend off” the migrant caravan (estimated to be close to 3,500 persons) from Central America. Facing xenophobes and white supremacists who dehumanize them and are doubtless posed to “shoot first [and] ask questions later,” what hope do they have? More to the point, what can we do to help them?

Turning to more theoretical questions, John Cobb says that “Christian theology should reconceive Christ” in the face of our pluralistic world (Christ in a Pluralistic Age 1975, 20–21), noting that “the meaning of Christ” change with context (21). This seems apropos of the present season, a season wherein Christians worldwide anticipate the Incarnation of Christ. We can, and I would, conceive of this anticipated Incarnation as a continual Incarnation. Teilhard takes a similar tack when he says that

I believe that the Messiah whom we await, whom we all without any doubt await, is the universal Christ; that is to say, the Christ of evolution. (Teilhard, “Christology and Evolution,” in Christianity and Evolution, 95) 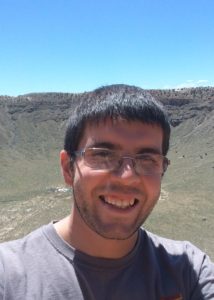