The Liturgy of the Palms

Jerusalem is crowded for the Passover time. Jesus and his disciples are preparing to enter the city. Centuries earlier, the prophet Zechariah had described for the residents of Jerusalem a king who would come and bring peace. He had said that they would recognize this savior because he would come “humble and riding on a donkey ― on a colt, the foal of a donkey.” This image had been taught to the children in their religious training.

The crowds in Jerusalem that day had this image in mind. They were suffering hard times living under Roman rule. They wanted a king just like their hero King David. Things had never been as good as they were when David had been their king. David was remembered with much nostalgia for the good old days. So they were looking for someone to come and do again for them what David had done.

When Jesus enters the city, he sends a message to the people about his identity. He arranges for a donkey on which to ride into town. The people get the “king” part. They respond with a festival and singing Hosanna, by which they mean “fix things for us, get rid of these occupying Romans, make us like the proper kingdom of proud and happy people we once were.” They greeted him as they would have greeted King David.

But Kings normally come riding on horses, usually big, white ones. Their power is obtained and sustained by force. They like prestige and the “perks” of the office. They expect to be treated to the best.

Kings love power. But Jesus’ power is love. His power isn’t a matter of controlling force, but of eternal love. Psalm 118: 1-2 describes that love as steadfast and enduring forever. He comes to “open the gates of righteousness” and “to give light.” As Zechariah foretold, this messiah comes not to control the world but to care for it.

The crowd discovered that the “king” was not going to give them what they expected. The very next story in Matthew’s gospel pictures Jesus going into the temple and driving out people who were buying and selling there. He calls these people “thieves” and defends the temple as a “house of prayer.” The rest of the time he is in town, he heals blind and crippled people. The crowds get the picture that this man is not the kind of king they had expected. Jesus soon encountered not a celebratory, welcoming  group, but an angry mob demanding that he be crucified.

This different kind of king is in our world every day. What kind of welcome do we give him?

The Liturgy of the Passion

WHO TELLS YOU WHAT TO DO?

Pilate had a problem! As the Roman governor in Jerusalem, he was in charge of dispensing justice. An angry mob had presented him with someone to kill. The whole situation made him very uneasy. He did not understand the problem. The issue seemed to be that this man was claiming to be the King of the Jews. That would be an issue for the Jews to settle among themselves, Pilate reasoned. But the chief priests and elders in that part of the Jerusalem population were adamant. They wanted Pilate to deal with the problem. So Pilate looks for direction about what to do? He interviews Jesus and gets no help. Pilate presses the issue: “Don’t you hear what all of these people are saying about you?” No answer. Then Pilate has a brilliant idea. Every year at the Passover, the Roman governor sets free one prisoner that the crowd chooses. So he offered Jesus as a choice. But the crowd chose alternative #2 named Barnabas. While this was going on, Pilate’s wife sent Pilate a message. “Have nothing to do with that innocent man, because in a dream last night I suffered much on account of him.” Here was an escape option. But Pilate needed more support, so he  asked the crowd, ”What shall I do with Jesus called the Messiah?” “Crucify him!” was the answer. Pilate pushed them. What crime has he committed? The crowd shouted at the top of their voices: “Crucify him!”

Pilate  responded to the pressure, symbolically washed his hands, had Jesus whipped and turned over to be crucified. Pilate knew this was the wrong thing to do. He tried desperately to avoid it. Jesus did not help. And the rest is history.

Pilate’s story raises for us the question, “Who tells us what to do? Who tells me what to do?”

One possible answer for the person of faith is: God. The scriptures are full of stories about people who have heard God’s call and who responded by doing what God tells them to do. Sometimes they were not even asking, but they heard God’s call and trusted and responded. This can be an everyday experience for those who want to serve God’s will in the world. Christians regularly pray, “May your kingdom come on earth as it is in heaven.” We can trust that if we want to be part of the answer to that prayer, God can use us and will have custom-designed answers that fit us and our opportunities available when we ask and listen. 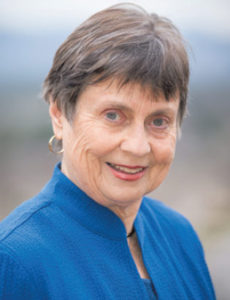 Dr. Martha Rowlett is a minister in the United Methodist Church, and author of four books on prayer. She earned her Doctor of Ministry at Claremont School of Theology in 1981 and did her doctoral project on “Process Theology of Prayer” with John Cobb. Her book, Weaving Prayer Into the Tapestry of Life, provides an overview of the understanding and practice of prayer, offering an invitation to the reader to move from thinking to doing. A French translation of this book is currently in production by a French publisher. Now Senior Pastor Emeritus at Rolling Hills United Methodist Church in Rolling Hills Estates (CA), Martha  has served churches in Virginia, California and Washington state, and on the Conference staffs of both of the California annual conferences. Originally from Virginia, she has lived most of her adult life in California and Washington and currently enjoys mountain living in Asheville, North Carolina.