The First Reading and Gospel bring us to the threshold of Good Friday and Easter by reminding us once again that our Lenten reflections are preparations for appropriating the new life offered to us in Jesus Christ. The two selections deal with the theme of new life, however, in very different ways. Ezekiel 37 is the prophet’s word of hope to a people who have suffered the loss of their sacred homeland and now exist despairingly in exile. The vision of the bones of the dead brought life is a dramatic way of envisioning a future for a heartbroken community, a bold declaration that what seems impossible from a human perspective is in fact possible for God. God’s chosen people may seem to have been destroyed and deprived of their unique destiny, but God will defy all odds by reviving them. John 11, on the other hand, is a theological reflection on the meaning of resurrection for the individual and an implicit critique of an understanding of the latter that is focused solely on a future existence beyond physical death.

The seeming hopelessness of the people’s situation in Ezekiel 37 is expressed in the starkness of the imagery. That the reader is asked to imagine not merely dead bodies but bones that are “deader than dead,” from which all flesh has rotted away and have therefore dried out completely. They signify the most extreme degree of hopelessness that one could imagine, so that God’s question, “Can these bones live?” must seem absurd. “Of course not” would be an appropriate answer—appropriate, that is, from a merely human perspective. Ezekiel’s response, “O Lord GOD, you know,” however, suggests a different way of viewing the situation. It is difficult to know whether this declaration is said with genuine confidence, but in any case it signifies that what is beyond human capacity or imagination is nevertheless possible for God. Significantly, however, God accomplishes the feat not by simple fiat but through human agency. In keeping with the thoroughly biblical notion that the words of the prophets are not merely predictive but have effective power, it is Ezekiel’s own prophetic utterances that facilitate the miracle. This power is of course ultimately derived from God, but it is Ezekiel’s cooperation that brings the desired result to fruition. The point is thus not really that God can do absolutely anything unilaterally, but rather that with human cooperation God can in fact accomplish what seems to the human mind impossible. And this point is quite in keeping with the process-relational view that God does not hold all the power in the universe, which would mean that lesser entities such as human beings in fact hold none. To exist at all is to have some degree of power, and without such power we would not be free and responsible persons.

In John 11, when the sisters of Lazarus send Jesus a message that their brother is ill, Jesus does not go immediately to see about him but remains where he is for two days; and during that time Lazarus dies. This behavior is strange on the surface, but the reader has already been coached by verse 4 that all will be well and that the illness is in fact a means through which both Jesus and God will be glorified. This point, moreover, is extended in verse 15, where Jesus tells his disciples that what is about to happen is to encourage their belief. And we get a hint of the disciples’ incomplete faith in Thomas’s response to Jesus’s eventual decision to go to Lazarus after he has died. Knowing that the Jewish authorities are seeking to kill Jesus, he says “Let us also go, that we may die with him.” Willingness to die with Jesus is a sign of both courage and a degree of faith, but the statement also shows that Thomas is at this point unable to grasp the full weight of who Jesus is and what his presence in the world means. The reader, however, is instructed in this point through Jesus’s conversation with Martha, which is one of the many stories of faith-development we find in the gospel of John.

Martha, too, exhibits a degree of faith in her response to Jesus’s declaration that her brother “will rise again.” “I know that he will rise again in the resurrection at the last day,” she states. Jesus’s response, however, is a partial rebuke: “I am the resurrection and the life. Those who believe in me, even though they die, will live, and everyone who lives and believe in me will never die.” The point is that Jesus himself is in fact the source of life and that both resurrection and life are available, not just in the general resurrection at the last day but here and now. In John 6:52-54, we find an affirmation of traditional notion of eschatology focused on a general resurrection in the future. Here, however, the focus is on resurrection as a present possibility, and this “realized eschatology” is in fact the more consistent emphasis throughout this entire gospel. In 17:1, for example, eternal life is defined qualitatively as knowledge of God. And the flip side of this is that God’s judgment is pulled into the present also. In 3:18 we read that those who reject Jesus are “condemned already,” and in 12:31 Jesus, as he speaks about his imminent death, proclaims that “Now is the judgment of this world.” The emphasis in John 11, however, is on the positive aspect of realized eschatology: new life is possible in the present. Grasping this point is an essential element of faith in Jesus. It is a way of acknowledging that he is in fact “the resurrection and the life,” “the light of the world,” etc. And, given the course of the conversation in verses 21-26, this is precisely what Martha acknowledges in verse 27—thus completing her faith journey.

If I had to choose one concept that leaps out at me in these two readings it would be hope, and I think of this on both the personal and the collective levels. Many people struggle to maintain hope in their personal lives, whether because of failures in their occupations or personal relationships or because of internal struggles with addictions or destructive compulsions with respect to other behaviors. The message of John 11 is particularly relevant on this level, proclaiming that as we connect to the true source of life we can in fact renew our hope for a fruitful and meaningful existence. On a broader level, persons with a social conscience and a sense of history may well be prone to falling into despair in the face of such monumental issues as the climate crisis, perpetual war, the persistence of homophobia, racism, sexism, xenophobia, and the alarming tendencies toward fascism in many countries. Progressive Christians may also find it difficult to maintain hope for the church in the face of the support some segments of the church give to policies that are blatantly contradictory to the Jesus ethic. In these cases, Ezekiel 37 offers a particularly potent word of hope: we may not be able to imagine how the needed radical changes can be effected, but to believe in a God of love deeply involved in the affairs of the world is also to nurture hope for the future—both for the world and for the church. A sermon based on these texts and focused on both the personal and collective dimensions of hope would in my estimation be a fitting conclusion to a series of Lenten sermons.

The Pauline dualism of flesh and Spirit is not, as in Gnosticism, a dualism of material versus nonmaterial realities, or matter as opposed to mind. “Flesh” in Paul’s vocabulary is not matter per se; it is a mode of existence in which a person lives as if there were no spiritual dimension to human existence—that is, as if the physical body with all its needs and urges were the sum total of what we as human beings are, as if there were indeed no Spirit to give it meaning. But, as Luke Timothy Johnson points out, “[t]he things of the flesh are not necessarily physical things, but all the ways of measuring reality according to the idolatrous impulse, as a closed system removed from God’s claim.”1 According to Paul, we are therefore confronted with two opposing ways of conducting our lives. We can live “according to the flesh” or “according to the Spirit.” For Paul, those who are in Christ have been given the power to live according to the Spirit, which means to follow the promptings of the Holy Spirit that now dwells within them. Life in the Spirit, in stark contrast to life according to the flesh, is a life of moral action, characterized especially by love.

In Romans 8:6-11, Paul reminds his readers that, as persons of faith, they are in fact not in the flesh but in the Spirit. He makes clear, however, that those in Christ are not immune to the temptations offered by the flesh. The passages is therefore a warning not to fall into sin, although at the same time a proclamation and a promise, as if to say, “New life has been given to you in Christ; don’t blow it!” A sermon based on this passage might explore the various ways in which, to pick up on Luke Johnson’s phrasing, we allow some aspects of our lives to remain closed systems, “removed from God’s claim” and thus deny the gracious gift of the indwelling Spirit of God. The flesh/Spirit motif, however, could also be worked into a sermon on hope along the lines discussed above. One of the temptations “the flesh” holds out for us is a kind of cynicism that says, “Well, there’s nothing we can do about all this; so we might as well go along with ‘the way things are’.”

“Out of the depths”—what power that opening phrase has for anyone who has experienced deep frustration or despair. We know instinctively what “the depths” are. The psalm, however, is ultimately a declaration of hope. We human beings are frail and easily fall into sin; but God forgives. And to the extent that we know God at all, we are not devoid of hope. And so we wait, and we nurture patience even as we mourn all our personal failures and the unspeakable horrors and injustices we see in the world today and have plagued humankind from the beginning. For God, as verse 7 proclaims, is both loving and powerful; and God will redeem. 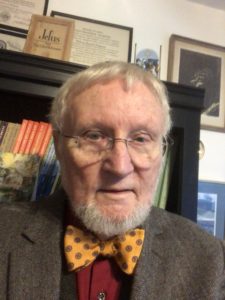 Russell (Russ) Pregeant is Professor of Religion and Philosophy and Chaplain, Emeritus at Curry College, Milton, Massachusetts, where he taught a variety of courses, including New Testament, Old Testament, Religion and Politics, and Contemporary Theological Issues. He was also frequently Visiting Professor in New Testament at Andover Newton Theological School. A native of Louisiana, he is an ordained minister in the United Methodist Church and has served as an associate pastor in New Orleans and as an interim pastor in Needham, Massachusetts. He now lives in Clayton, Georgia with his wife, the Rev. Sammie Maxwell. Russell is the author of nine books, most recently For the Healing of the Nation: A Biblical Vision (2016) and Reading the Bible for All the Wrong Reasons (2011). He has also completed a second edition of an earlier book on process-relational theology, Mystery without Magic, which is now under consideration for publication.